The healthy human body is equipped with a powerful set of tools for resisting the onslaught of invading microorganisms (such as viruses, bacteria, and parasites). Unfortunately, this set of tools, known as the immune system, sometimes goes awry and attacks the body itself. These misdirected immune responses are referred to as autoimmunity, which can be demonstrated by the presence of autoantibodies. 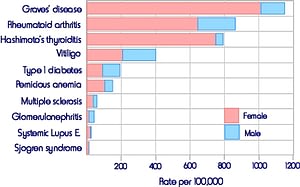 Autoimmune diseases are a major threat to the health of all Americans. At least ten millions Americans suffer from the more than eighty illnesses caused by autoimmunity. They are a special threat to women; about 75% of the patients are women. Autoimmune diseases are among the ten leading causes of death among women in all age groups up to 65. The bar graph shows the prevalence of the top 10 autoimmune diseases in the United States in 1996 (from Jacobson DL et al. Clin Immunol Immunopathol, 84: 223-243, 1997).

Our Clinic is the ideal place for women, men or children to secure an integrative, holistic and personalized approach to health care.  We partner with each patient to focus on the root cause of their illness, support their recovery, and help them maintain good health.

Experience a truly integrated approach to skin and optimal health!